Our expedition for the rainy season on Mt. Cameroon has ended and our team has returned to Czechia on Friday. The majority of the team spent three weeks in the Mann’s Spring area (±2200 m) and two weeks close to the Crater Lake (±1450 m) to record flower visitors of all flowering species including epiphytic plants like orchids and begonias. Especially at the lower elevation a vast amount of flowering orchids were found and recorded. Over 260 whole-day recordings were made during this expedition. Now back in Czechia it will be a challenge for our team to watch these recordings and record the visitors. 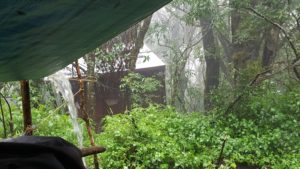 A rainy day in the Mann’s Spring. © Y. Klomberg

Another part of our team stayed in Mann’s Spring during the whole expedition to investigate the hovering behaviour of sunbirds on Impatiens sakeriana. Initially they had some troubles collecting the data needed, but in the end managed to get some interesting results.