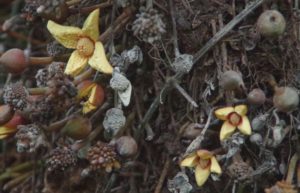 Part of our data collected during the early 2016 expedition to Mt. Cameroon has been published in the African Journal of Ecology. It concerns a case study on Uvariopsis dioica (Annonaceae), a smaller tree flowering at its base, where we filmed the plant’s visitors (sometimes large ones). Among the 1103 individual visitors, ants and cockroaches are the most common. We also found some pollen grains attached to cricket and cockroach legs, possibly indicating the presence of a primitive pollination system in the plant species. The publication can be found online here.