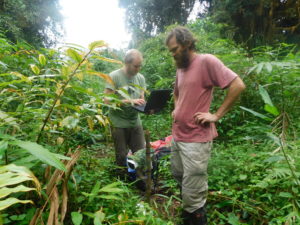 Michael and Yannick setting a camera on Impatiens mannii’s flowers.

The majority of us are back from Africa. Yannick, Jan, Vincent and Michael Bartoš have returned, mostly unscathed, from their expedition to Mt. Cameroon on Friday. They continued with our research on pollination systems, as well as lepidopteran diversity in the higher elevations of Mt. Cameroon. Simultaneously, Robert has come back from southern Africa yesterday, where he has been sampling moths along a gradient of environmental productivity. In a bit more than a week, Eliška, Sylvain and Petra Janečková will also return from the Bamenda Highlands in Cameroon. They are still collecting data on both pollination systems and moths. Now, we have approximately a month for recovering and preparing of the next Cameroonian expedition in late January 2017.